Supporting a Green December: “456 Hours of Giving” for the the Orono Village Green Project 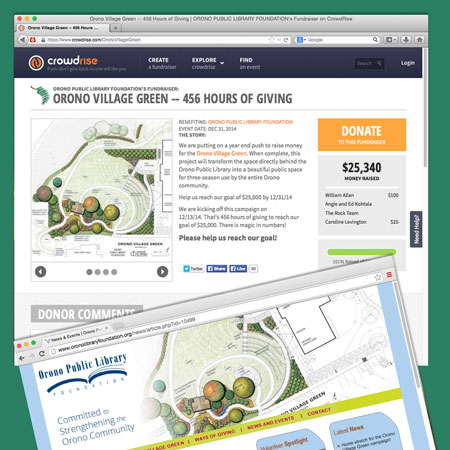 The campaign kicked off its “456 hours of giving” on 12/13/14 with a bold year-end goal to raise $25,000 in the last few weeks of the year. RainStorm, which has been a long-time supporter of the Library, helped implement an online fundraising plan to support the work being done by volunteers.

“What really worked well was integrating the various ways to reach people using not only traditional methods like mailings and print ads, but also online ads and social media to meet an aggressive goal in the last two weeks of the year,” said Sarah Kenney, Foundation Board President and campaign Co-Chair. The effort was a success and raised more than $44,000 in total year end giving.”

The aggressive goal and short timeline made it essential to reach people through multiple avenues. With the help of dedicated volunteers and integrated technology provided by RainStorm, they not only met but exceeded their year-end goal.

RainStorm helped to create and administer a campaign using the online fundraising website Crowdrise. Crowdrise had great features like simple social and peer-to-peer sharing, real-time donor listings, campaign images, and more. Integrated into the website, the total was updated automatically as new gifts were given. Campaign updates were made regularly using Facebook and Twitter, drawing donors to the site. Additionally, the Bangor Daily News donated online advertisements, designed by RainStorm’s Evan Habeeb, which linked directly to the Crowdrise site. Matching physical pieces – a postcard mailing and print advertising – were also created for the campaign.

Read more about the Orono Public Library Foundation’s Orono Village Green Project and the 456 Hours of Giving campaign at their website – http://www.oronolibraryfoundation.org.