If you’ve called RainStorm you’ve likely heard Suze Howe’s friendly voice on the end of the line, particularly if you’ve called about email or needed some support. Sporting an attitude as bright as her trademark red hair, she’s one of the most spirited of RainStorm’s staff.

Suze started at RainStorm nearly three years ago and now holds the title of Support Specialist. She’s actually much of a “support generalist” because she supports clients and RainStorm staff in so many ways! 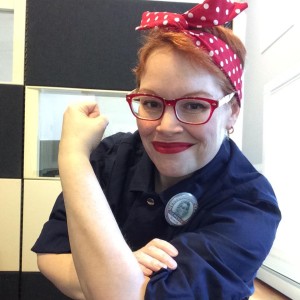 For our clients, Suze is part of our customer support team for email and websites and is also the person who is responsible for accounts and billing. She’s also the person who sets up domain registrations and email service,  Google services for clients who use Google Analytics and Adwords, and manages Facebook advertising accounts for those who are utilizing those services.

For the RainStorm team, Suze takes care of everything from office supplies, administrative support, research, proofreading, and beta testing and first feedback on the user experience of our websites.

When asked what she does she laughs,”I kind of fill in the gaps anywhere there is something that needs to be done. It’s the strangest job I’ve tried to explain. If it’s something random, it’s probably me that’s doing it.”

Suze is also the Official Filler of Candy Dishes at RainStorm, ensuring that there’s a supply of treats always at the ready – from the dish-that-never-empties on the office table to the TARDIS-shaped box on her desk – everyone appreciates her care regarding that particularly effective morale booster.

She Can Do It!

Her cheer and endless good nature are always appreciated, too, though she turns that back around as a reflection of the environment at RainStorm. “The people are big part of what sold me in the beginning,” she says, “When I came in to meet everybody – there was such a feeling of camaraderie and it has just been the best atmosphere I have experienced in any job, ever. It’s perfect  –  and it gets better and better all the time. It’s awesome and I love it.”

A native Mainer, Suze was born in and lived DownEast before moving to Hampden, where she lived most of her life, with the exception of a four-year break to Mississippi before returning to Hampden, where she attended high school. She holds a degree from Clark University in Graphic Design, and originally came to RainStorm as an administrative assistant but it became clear that she had great tech skills, including web development, and she quickly became RainStorm’s customer support lead. 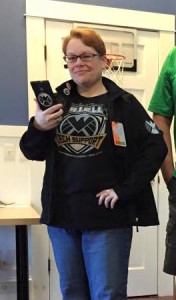 The Tech Support Agent of S.H.I.E.L.D. appears at RainStorm’s 2015 Halloween costume day. We suspect it’s might not actually a costume…

“I’m always learning new things,” she notes, as she describes what it’s been like for the past couple of years. “We were only five people when I started. As people come and go, roles have changed and the way we work has changed. We’ve had lots of technical advances, for example, we can now work remotely if we need to, which is incredible.”

“When I started, everyone did a bit of everything, which was fine for the smaller projects we had when we had a more local focus. But we’ve shifted to a very team-centered dynamic as we’ve grown, and while we still help each other, we’re focused – you don’t get distracted or pulled away – which helps everybody to be better at their jobs.”

“You can see it in the quality of the work, the size of the projects, which have gone up. A growth from five to eight people doesn’t seem like that big a change but the company has broadened its scope and also done deeper development and that’s been amazing.”

Suze believes that the ability to work smoothly is heavily influenced by RainStorm’s culture of doing things together that are not work-related. “Everything isn’t about work – we do get to have fun together. It keeps the office morale nice and high. We all get along really well. We’ve done some cool stuff! Whitewater rafting was a big deal. We did archery last year. It was fun and I was terrible at it. It’s nice, because we do things that I would not normally do on my own!” She praised the “Planned Activities Initiative at RainStorm” for increasing RainStorm’s ability to work as a team by getting everyone involved in activities that might present a challenge, like rafting and archery, or a simple restaurant gathering toward the end of a work day when everyone has a chance to eat, drink, relax and usually laugh a lot.

Of the projects that have been completed during her time here, the recently-launched RSU 22 website was a favorite, since it was her alma mater and she enjoyed seeing what had changed and what had stayed the same. As a Hampden resident, she also appreciates how well it reflects the district in which she resides.

Another of her favorite projects has been working with CourseStorm, which began as a relatively small piece of programming that helped with online class registration, and is now it’s own company. “Watching CourseStorm become its own entity has been fascinating. Over time, I’ve been both a guinea pig and customer support, so it’s been interesting to do beta testing. Being asked to intentionally break things is neat – I’m apparently pretty good at it.”

Her experiences in beta testing for both RainStorm and CourseStorm has been rewarding, “because we want to make sure that everything is as simple and easy to use as possible.”

“I love being able to do everything. Crazy as it sounds, with all the random tasks, I love it. I get to exercise all the skills I have and that keeps it interesting. I never know from one minute to the next what’s going to happen. And now,” she said with a grin, “I have to go arrange the company retreat!”